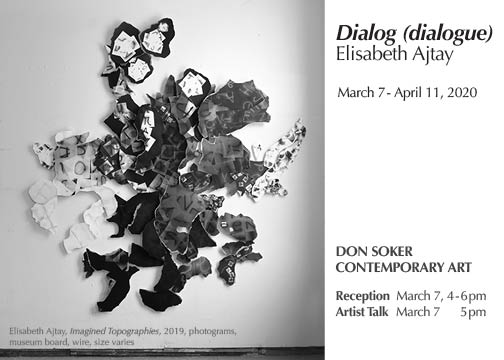 Dialog/Dialogue is a body of work that is a continuation of Elisabeth Ajtay’s exploration of the moon alphabet in the context of emotional states. It’s also a reflection migration and the notion of otherness through an examination of the challenges that language poses, expressed through visually abstracted linguistic shapes within the image.

With the Moon Alphabet, a work that she drew with the light of the moon in 2013-14, she created photograms using negative and positive imagery of the moon alphabet. The hard edge of each negative contrasts with the movement of the letters on the photographic surface. While the organic shapes suggest motion, the hard-edged geometry juxtaposes the compositions in a series of references to the systemic structure of language that grants us access to our immediate living environment and to culture.

The torn, reassembled, sculptural photograms she creates are based on sketches of migrational patterns of humans’ movement. The abstracted images examine limiting/inhibiting, as well as connecting/unifying aspects of language within inter-personal/national exchange.

Elisabeth Ajtay received her MFA from the San Francisco Art Institute and an MS from the UAS Dortmund, Germany. She was born in Romania and is now based in New York City. Her works have been shown extensively in Europe and the US. This is her second solo exhibition with DSCA.